Bonnie and Clyde Grey Hoodie is a design I created because people call me and my fiancé the reincarnated Bonnie and Clyde. No, we don't get in trouble together it's just our Veteran connection that makes us unique. With this specific design, I created a silhouette of Bonnie and Clyde with the trees and woodlands at their feet to represent my fiancée and I are both from the Michigan woodlands. With a modern script text Clyde and/or Bonnie over a dark grey background.

Available only at the link below. Click on photo or link to order  the matching set 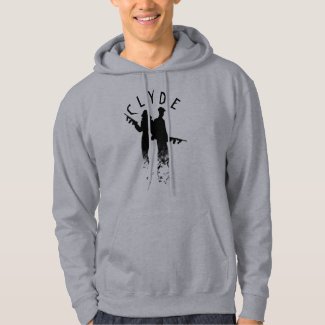 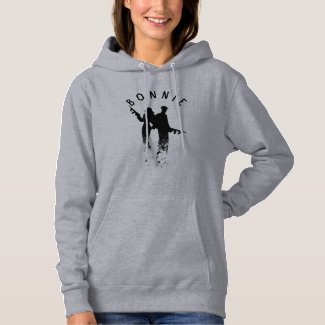 Bonnie Elizabeth Parker (October 1, 1910 – May 23, 1934) and Clyde Chestnut Barrow (March 24, 1909 – May 23, 1934) were an American criminal couple who traveled the Central United States with their gang during the Great Depression, known for their bank robberies, although they preferred to rob small stores or rural funeral homes. Their exploits captured the attention of the American press and its readership during what is occasionally referred to as the "public enemy era" between 1931 and 1934. They are believed to have murdered at least nine police officers and four civilians.[1][2] A photo of Parker posing with a cigar came from an undeveloped roll of film that police found at an abandoned hideout, and the snapshot was published nationwide. Parker did smoke cigarettes, although she never smoked cigars.[3][notes 1] According to historian Jeff Guinn, the photos found at the hideout resulted in Parker's glamorization and the creation of myths about the gang.